The cost of serving Jesus Christ is your life. Even though in America you don’t hear about these stories, Christian martyrdom is still happening today. Almost all of the 12 disciples were killed for spreading the Word of God and not denying God because of their faith. 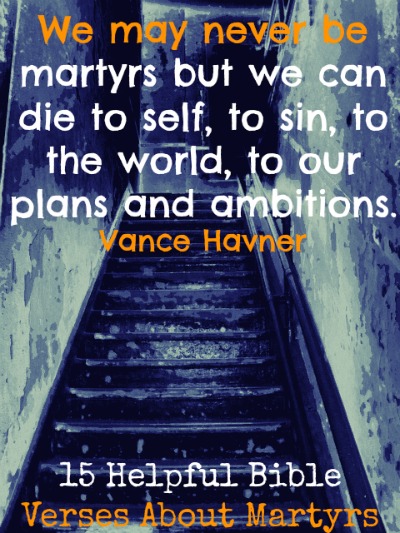 This is one reason we know that the gospel is true. If people like Paul went and preached somewhere and was beaten almost to the point of death wouldn’t they change their message?

The Word of God stays the same with true Christians even though we are hated, persecuted, and killed. All you have to do is open your mouth and unbelievers will hate you because they hate the truth. They know it’s true, but they are going to deny it because they love their sinful worldly lifestyle and don’t want to submit to the Lord.

Today’s so-called Christians don’t like opening their mouths for Christ in fear of persecution and they even change the Word to suit others, but God is not mocked.

Now there are many people who go out their way and purposely seek persecution just so they can say I was persecuted and this is wrong. Don’t do this because this is self-glory. Christians don’t seek persecution.

We seek to live for Christ and glorify God and even though in America it’s not as harsh as other countries, seeking to live a godly life will bring persecution. We love Christ so much if some random person put a gun to our head and said change His Word for something else we say no.

Say Jesus is not Lord we say Jesus is Lord. Boom boom boom! Jesus Christ is everything and through death we will never deny Him. When this happens people say how can they still be serving Him? Who is this Jesus guy? People who hear this will get saved because we glorify our Father in Heaven.

We may never be martyrs but we can die to self, to sin, to the world, to our plans and ambitions. Vance Havner

1. 1 Peter 4:14-16 When people insult you because you follow Christ, you are blessed, because the glorious Spirit, the Spirit of God, is with you. Do not suffer for murder, theft, or any other crime, nor because you trouble other people. But if you suffer because you are a Christian, do not be ashamed. Praise God because you wear that name.

2. Matthew 5:11-12 Blessed are ye, when men shall revile you, and persecute you, and shall say all manner of evil against you falsely, for my sake. Rejoice, and be exceeding glad: for great is your reward in heaven: for so persecuted they the prophets which were before you.

3. 2 Timothy 3:12 Yes! All who want to live a God-like life who belong to Christ Jesus will suffer from others.

4. John 15:20 Remember what I told you: ‘A servant is not greater than his master.’ If they persecuted me, they will persecute you also. If they obeyed my teaching, they will obey yours also.

7. Matthew 24:9 “Then they will deliver you up to tribulation and put you to death, and you will be hated by all nations for my name’s sake.

8. John 16:1-3 These things have I spoken unto you, that ye should not be offended. They shall put you out of the synagogues: yea, the time cometh, that whosoever killeth you will think that he doeth God service. And these things will they do unto you, because they have not known the Father, nor me.

10. Matthew 10:28 “Don’t be afraid of those who want to kill your body; they cannot touch your soul. Fear only God, who can destroy both soul and body in hell.

12. Matthew 16:24-26 Then Jesus told his disciples, “If anyone would come after me, let him deny himself and take up his cross and follow me. For whoever would save his life will lose it, but whoever loses his life for my sake will find it. For what will it profit a man if he gains the whole world and forfeits his soul? Or what shall a man give in return for his soul?

13. Acts 7:54-60 Now when they heard these things they were enraged, and they ground their teeth at him. But he, full of the Holy Spirit, gazed into heaven and saw the glory of God, and Jesus standing at the right hand of God. And he said, “Behold, I see the heavens opened, and the Son of Man standing at the right hand of God.” But they cried out with a loud voice and stopped their ears and rushed together at him. Then they cast him out of the city and stoned him. And the witnesses laid down their garments at the feet of a young man named Saul. And as they were stoning Stephen, he called out, “Lord Jesus, receive my spirit.” And falling to his knees he cried out with a loud voice, “Lord, do not hold this sin against them.” And when he had said this, he fell asleep. – (What does the Bible say about sleep?)

14. Revelation 17:5-6 And upon her forehead was a name written, MYSTERY, BABYLON THE GREAT, THE MOTHER OF HARLOTS AND ABOMINATIONS OF THE EARTH. And I saw the woman drunken with the blood of the saints, and with the blood of the martyrs of Jesus: and when I saw her, I wondered with great admiration.

15. Mark 6:25-29 And she came in straightway with haste unto the king, and asked, saying, I will that thou give me by and by in a charger the head of John the Baptist. And the king was exceeding sorry; yet for his oath’s sake, and for their sakes which sat with him, he would not reject her. And immediately the king sent an executioner, and commanded his head to be brought: and he went and beheaded him in the prison, And brought his head in a charger, and gave it to the damsel: and the damsel gave it to her mother. And when his disciples heard of it, they came and took up his corpse, and laid it in a tomb.