Grace Vs Mercy Vs Justice Vs Law 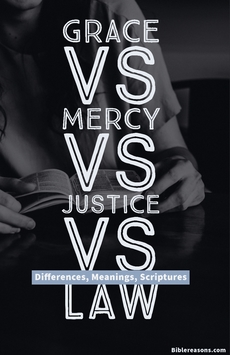 Grace is unmerited favor. The Greek word is charis, which can also mean blessing or kindness. When the word grace is used in conjunction with God it refers to God choosing to bestow unmerited favor, benevolence, and blessing upon us, rather than pour His wrath on us as we deserve for our sin. Grace is not just that God hasn’t spared us, but that He is showering us with blessing and favor in spite of ourselves.

Example of grace in the Bible

During the time of Noah, mankind was extremely wicked. Man was proud of his sins and reveled in them. He did not know God nor care that his sins were an affront to the Creator. God rightfully could have wiped out all of mankind. But He chose to bestow grace to Noah and to Noah’s family. The Bible says that Noah was a God-fearing man, but he still was far from the perfection that God requires. The Bible does not elaborate on how well his family lived, yet God chose to be gracious to them. He provided a way of salvation from the destruction that fell upon the earth and He blessed them tremendously.

If a millionaire goes to a park and gives the first 10 people, he sees a thousand dollars, he is bestowing grace and blessings upon them. It is undeserved, and it is only to those whom he has chosen to bestow it to.

Grace would be, if a man is speeding down the road and gets pulled over, the police officer could rightly write him a ticket for violating the law. However, the officer chooses to bestow grace and let him go with a warning, and a coupon for a free meal at Chick-fil-A. That would be the officer bestowing grace upon the speeding man.

Jeremiah 31:2-3 “Thus says the LORD: The people who survived the sword found grace in the wilderness; when Israel sought for rest, the LORD appeared to him from far away. I have loved you with an everlasting love; therefore, I have continued my faithfulness to you.”

Acts 15:39-40 “And there arose a sharp disagreement, so that they separated from each other. Barnabas took Mark with him and sailed away to Cyprus, but Paul chose Silas and departed, having been commended by the brothers to the grace of the Lord.”

2 Corinthians 12:8-9 “Three times I pleaded with the Lord about this, that it should leave me. But he said to me, “My grace is sufficient for you, for my power is made perfect in weakness.” Therefore, I will boast all the more gladly of my weaknesses, so that the power of Christ may rest upon me.”

John 1:15-17 “(John bore witness about him, and cried out, “This was he of whom I said, ‘He who comes after me ranks before me, because he was before me.’”) And from his fullness we have all received, grace upon grace. For the law was given through Moses; grace and truth came through Jesus Christ.”

Romans 5:1-2 “Therefore, since we have been justified by faith, we have peace with God through our Lord Jesus Christ. Through him we have also obtained access by faith into this grace in which we stand, and we rejoice in hope of the glory of God.”

Ephesians 2:4-9 “But God, being rich in mercy, because of the great love with which he loved us, even when we were dead in our trespasses, made us alive together with Christ— by grace you have been saved—and raised us up with him and seated us with him in the heavenly places in Christ Jesus, so that in the coming ages he might show the immeasurable riches of his grace in kindness toward us in Christ Jesus. For by grace you have been saved through faith. And this is not your own doing; it is the gift of God, not a result of works, so that no one may boast.”

Example of mercy in the Bible

Mercy is seen clearly in the parable Jesus told about the man who owed a lot of money. He owed more than he could make in a year. On the day that he was to repay the money, the lender told him that he could rightfully demand the money of him, and that he had acted wickedly in not having the money ready, yet he chose to be merciful and forgive his debts.

Another illustration of mercy is found in Les Miserables. Jean Valjean at the beginning of the story robbed the Bishops home. He took several silver candlesticks and was apprehended. When he was brought before the Bishop before taken to prison and hung, the Bishop had mercy on Jean Valjean. He did not press charges – he told the officers that he had given him the candlesticks. He then took it a step further and bestowed grace by giving him more silver to sell so that he could start his life over.

Genesis 19:16 “But he hesitated. So the men seized his hand and the hand of his wife and the hands of his two daughters, for the compassion of the LORD was upon him; and they brought him out, and put him outside the city.”

Philippians 2:27 “For indeed he was sick to the point of death, but God had mercy on him, and not on him only but also on me, so that I would not have sorrow upon sorrow.”

1 Timothy 1:13 “Even though I was once a blasphemer and a persecutor and a violent man, I was shown mercy because I acted in ignorance and unbelief.”

Jude 1:22-23 “And have mercy on those who doubt; save others by snatching them out of the fire; to others show mercy with fear, hating even the garment stained by the flesh.”

2 Chronicles 30:9 “For if you return to the Lord, your brothers and your children will find compassion with their captors and return to this land. For the Lord your God is gracious and merciful and will not turn away his face from you, if you return to him.”

Luke 6:36 “Be merciful, even as your Father is merciful.”

Matthew 5:7 “Blessed are the merciful, for they shall receive mercy.”

Justice in the Bible means to treat others equitably in a legal sense. The Hebrew word used is mishpat. It means to punish or acquit every person only on the merits of the case – not based on their race or social status. This word includes not only punishing those who do wrong, but also ensuring that everyone are given what rights they have or are due. So not only is it punishment for the wrong doer, but also protection for those in the right. Justice is an important concept because it reflects the character of God.

Example of justice in the Bible

The narrative of Sodom and Gomorrah in Genesis 18 is a very apt one to illustrate justice. Abrahams nephew, Lot, lived near the city of Sodom. The people of the city were extremely wicked. God pronounced judgement upon the inhabitants of Sodom for there was no one in the city who feared the Lord, they all lived in outright rebellion and hatred of Him. Lot was spared, but all the inhabitants were destroyed.

We see justice being acted out in our lives frequently. When criminals are made accountable and punishable for their crimes, when the judge awards a monetary amount to those who were injured, etc.

Ecclesiastes 3:17 “I said to myself, “God will bring into judgment both the righteous and the wicked, for there will be a time for every activity, a time to judge every deed.”

Hosea 12:6 “But you must return to your God; maintain love and justice and wait for your God always.”

Proverbs 21:15 “When justice is done, it brings joy to the righteous but terror to evildoers.”

Proverbs 24:24-25 “Whoever says to the guilty, “You are innocent,” will be cursed by peoples and denounced by nations. But it will go well with those who convict the guilty, and rich blessing will come on them.”

Psalm 37:27-29 “Turn from evil and do good; then you will dwell in the land forever. For the LORD loves the just and will not forsake his faithful ones. Wrongdoers will be completely destroyed ; the offspring of the wicked will perish. The righteous will inherit the land and dwell in it forever.”

When the law is discussed in the Bible, it is referring to the entire Old Testament, the first five books of the Bible, the Ten Commandments, or the Mosaic Law. Simply put, the Law is God’s standard of holiness. It is this standard by which we will be judged.

Example of law in the Bible

We know how fast we can safely drive on the roads because of the laws governing the roads. These laws are stated in signs placed strategically along the roadside. So then as we are driving we can stay well within the realm of Right and outside the realm of Wrong in how fast we are driving. A violation of this law, or a breaking of this law, will result in punishment. The penalty must be paid for breaking the law.

Deuteronomy 6:6-7 “These commandments that I give you today are to be on your hearts. Impress them on your children. Talk about them when you sit at home and when you walk along the road, when you lie down and when you get up.”

Romans 6:15 “What then? Shall we win because we are not under the law but under grace? By no means!”

Deuteronomy 30:16 “For I command you today to love the Lord your God, to walk in obedience to him, and to keep his commands, decrees, and laws; then you will live in increase, and the Lord your God will bless you in the land you are entering to possess.”

Joshua 1:8 “Keep this Book of the Law always on your lips; meditate on it day and night, so that you may be careful to do everything written in it. Then you will be prosperous and successful.”

Romans 3:20 “Because by the works of the Law no flesh will be justified in His sight; for through the Law comes the knowledge of sin.”

How do they all work together in salvation?

God has set the standard of Holiness – Himself, revealed in His Law. We have violated His law by sinning against our Creator. Our God is perfectly just. He must punish the crimes of treason against His Holiness. Our judgement is death: eternity in Hell. But He chose to have mercy and grace upon us. He provided the perfect payment for our crimes – by providing His spotless lamb, Jesus Christ to die on the cross being our sin upon His body. He poured out His wrath on Christ instead. Jesus rose from the dead to conquer death. Our crimes have been paid for. He was merciful in saving us, and gracious by providing us with heavenly blessings.

2 Timothy 1:9 “He has saved us and called us to a holy life – not because of anything we have done but because of his own purpose and grace. This grace was given us in Christ Jesus before the beginning of time.”

Are you under the wrath of God for violating His Law? Have you repented from your sins and clung to Jesus to save you?