Bible verses about being a pushover 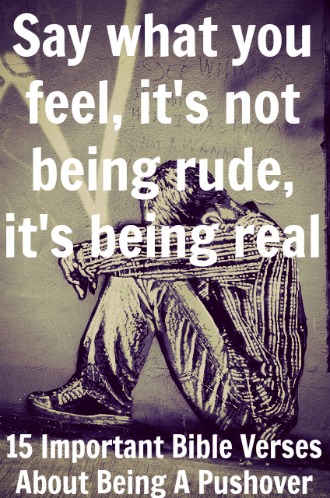 In this article I will show how being a pushover can affect you in every area of your life. I pray that no one uses this article to justify sin, unbiblical practices, anger, rudeness, retaliation, meanness, unfriendliness, etc.

If you use this for anyone of these things you have missed the point of this article and you’re in sin.

We have to draw the line and use discernment. Christians are going to be abused in this world and sometimes we are going to have to take it like the disciples took it. But, there are times when we are to be bold, straightforward, and speak up.

Turning the other cheek vs being a pushover.

Many people assume that turning the other cheek means that we are to allow others to abuse us. It doesn’t mean that if someone slaps you, you should let them slap your other cheek. When Jesus was struck He said, “hey why did you hit me?” Sadly, in this world if you allow someone to get away with something they will see it as a sign of weakness and they will continue to do it.

This is terrible for people like Christians who hate confrontation. Understand what I am saying. There are times when we should overlook something, but there are also times when we are to be assertive. I believe sometimes we have to be bold and stand up in a godly manner of course. Many people assume that being assertive means you have to be hostile, which is not true.

Sometimes at work, at school, or maybe even sometimes at home we have to boldly tell people how we feel. When we laugh things off and pretend that things don’t hurt us that gives people an open door to continue. Once again there are times when we shouldn’t take things so seriously, but if someone starts to go overboard and turn into a bully we have to boldly tell them to stop it and stand up for ourselves.

1. Matthew 5:39 But I tell you, do not resist an evil person. If anyone slaps you on the right cheek, turn to them the other cheek also.

2. John 18:22-23 When he had said these things, one of the officers standing by struck Jesus with his hand, saying, “Is that how you answer the high priest?” Jesus answered him, “If what I said is wrong, bear witness about the wrong; but if what I said is right, why do you strike me?”

When you continue to allow people to do things to you without saying a word you will become a ticking time bomb.

You will harbor malicious thoughts. We have all turned on the news and heard about a kid who was being bullied at school and ended up snapping and shooting up the school. This is what could happen when you are a pushover for a long period of time. I personally know what happens when we don’t kindly and respectfully express ourselves to our transgressors. You become a transgressor yourself.

I remember one time at an old job a co-worker was purposely making fun of me. He was purposely annoying me. For a long time I didn’t say anything. After all, I’m Christian. This is an opportunity to become more like my Savior. As time went on I began to hold ungodly thoughts towards him and I sought to avoid him. It’s hard to avoid somebody you work with. One day he started to annoy me and make fun of me again.

I became enraged and I turned to him and let’s just say I said a few things that I should have never said and I confronted him in a way I should have never confronted him. I walked away and I took the smirk off of his face with me. Five seconds later I felt such a strong conviction. I was so burdened by my actions. Not only did I sin against him, but more importantly I sinned against God and as a Christian what testimony is that to others?

I quickly repented and I saw him again 30 minutes later and I apologized and made peace. I told him how his actions and words affected me. After that day, we became good friends and he never disrespected me again. If I would have been straightforward and boldly, respectably, gently, and seriously told him how I felt the first time then it would not have led to me spewing ungodly speech. It’s good to express yourself. We need to let people know how we feel, but remember there is a way that we shouldn’t do it and there is a way that we should.

3. Ephesians 4:31-32 Let all bitterness and wrath and anger and clamor and slander be put away from you, along with all malice. Be kind to one another, tender-hearted, forgiving each other, just as God in Christ also has forgiven you.

4. Ephesians 4:29 Do not let any unwholesome talk come out of your mouths, but only what is helpful for building others up according to their needs, that it may benefit those who listen.

5. Matthew 18:15 If your brother or sister sins, go and point out their fault, just between the two of you. If they listen to you, you have won them over.

When you are a pushover you will end up going with the flow instead of speaking up.

The first verse shows that it is common for someone to speak up for themselves. Being a pushover doesn’t stop only in the workplace or at school. Many times even in Christian marriages there are pushover spouses. Some men are being led by their wife in marriage, which is wrong and they have no input on anything.

I knew I could fix the bumper, but I was persuaded to buy a new bumper. I should have said, “no I don’t want the bumper.” I was a pushover in that situation and I bought the bumper just to find out that I could have fixed the cracked bumper for cheaper. By God’s grace I was able to return the item, but that taught me a lesson. Being a pushover can cost you money especially when people try to rip you off, give you a bad price, or up the price. Don’t let anyone push you into paying a price you don’t want to pay. Speak up. Tell others how you really feel. Talk it out. I believe being confident in the Lord and trusting in Him rather than trusting the situation or people will help with being more vocal.

If someone who doesn’t speak up for themselves tries to buy a house or car they will get the worst price possible because they will be too afraid to negotiate. In the business world it is hard for a pushover to move up. Say what you need to say. There is a saying “closed mouths don’t get fed.” If you want something speak up. Don’t be afraid. It never hurts to ask.

6. Proverbs 31:8 Speak up for those who cannot speak for themselves, for the rights of all who are destitute.

7. Acts 18:9 And the Lord said to Paul in the night by a vision, “Do not be afraid any longer, but go on speaking and do not be silent.”

9. Galatians 5:1 For freedom Christ has set us free; stand firm therefore, and do not submit again to a yoke of slavery.

Being a pushover is dangerous.

We have to use discernment.

It’s a good thing to stop being a pushover. We have to pray for discernment for different situations. There is a way of going overboard and many try to change in a bad way. If you’re kind and love helping others don’t stop helping others. Don’t try to change your personality. Don’t become rude. Don’t insult someone back. Don’t start yelling. Don’t become arrogant. Discernment is essential. Sometimes the best thing to do is to be quiet.

Even Paul sacrificed and gave up his rights for the sake of the gospel. God uses different situations to work in us and work through us. Then, there are other times when we have to kindly and boldly speak up. What I like to do now is examine every situation thoroughly. I pray for wisdom and I allow the Holy Spirit to lead me. God is helping me to get better at this so every situation I use it as an opportunity to grow. It’s easier for me to say no now. It’s easier for me to say if I don’t like something. Even if people persist with something I stand firm.

There are times when God just says to let it go and give that anger to Him. Allow Him to move. We have to be careful become many times we want to speak up out of anger and pride. If we try to be assertive in a way that is unbiblical it will backfire. For example, trying not to be a pushover with your kids in the wrong way can provoke them to anger.

Another example, is me asserting myself in an ungodly manner. You don’t want to turn into someone who is unreliable, mean, or aggressive. What you need is to be able to boldly stand firm. You need to be able to draw the line. Every situation is different. Pray for discernment.

12. 1 Thessalonians 5:21–22  But examine everything carefully; hold fast to that which is good; abstain from every form of evil.

How can we do God’s will if we are not assertive?

When you’re not assertive you will start to compromise with sin. There are many people who fall into sin because they let pushoveritis take over and they go along with an ungodly activity. Most church leaders allow their congregation to live in rebellion. They allow devils in the pulpits.

13. 2 Corinthians 11:20-21 You put up with it when someone enslaves you, takes everything you have, takes advantage of you, takes control of everything, and slaps you in the face.

14. John 2:15-16 And making a whip of cords, he drove them all out of the temple, with the sheep and oxen. And he poured out the coins of the money-changers and overturned their tables. And he told those who sold the pigeons, “Take these things away; do not make my Father’s house a house of trade.”

15. Matthew 16:23 Jesus turned and said to Peter, “Get behind me, Satan! You are a stumbling block to me; you do not have in mind the concerns of God, but merely human concerns.”

Previous: Is Selling Drugs A Sin?