With the rise in a number of Bible based cults, the name Zion is getting mentioned more frequently in witnessing encounters. It’s important that we have a firm understanding of what this word means. 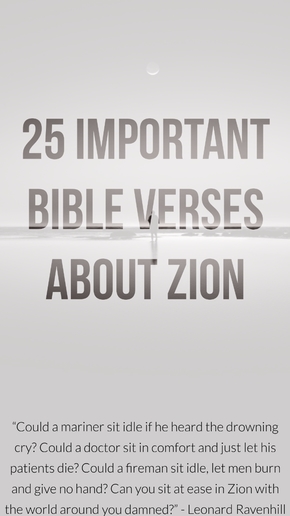 What is Zion in the Bible?

Zion in the Bible refers to the City of God. The name was originally given to a Jebusite fortress. The name survived and Mount Zion means “mountain fortress.”

Zion in the Old Testament

The name Zion wasn’t used in conjunction with Jerusalem until David captured the city and established his throne there. This is also the place where God will establish His Messianic King. God Himself will reign on Mount Zion.

1) 2 Samuel 5:7 “Nevertheless, David took the stronghold of Zion, that is, the city of David.”

2) 1 Kings 8:1 “Then Solomon assembled the elders of Israel and all the heads of the tribes, the leaders of the fathers’ houses of the people of Israel, before King Solomon in Jerusalem, to bring up the ark of the covenant of the Lord out of the city of David, which is Zion.

3) 2 Chronicles 5:2 “Then Solomon assembled the elders of Israel and all the heads of the tribes, the leaders of the fathers’ houses of the people of Israel, in Jerusalem, to bring up the ark of the covenant of the Lord out of the city of David, which is Zion.”

5) Psalm 110:2 “The Lord sends forth from Zion your mighty scepter. Rule in the midst of your enemies!”

6) Isaiah 24:23 “Then the moon will be confounded and the sun ashamed, for the Lord of hosts reigns on Mount Zion and in Jerusalem, and his glory will be before his elders.”

7) Micah 4:7 “and the lame I will make the remnant, and those who were cast off, a strong nation; and the Lord will reign over them in Mount Zion from this time forth and forevermore.”

8) Jeremiah 3:14 “Return, O faithless children, declares the Lord; for I am your master; I will take you, one from a city and two from a family, and I will bring you to Zion.”

9) 1 Chronicles 11:4-5 “Then David and all Israel went to Jerusalem (or Jebus, as it used to be called), where the Jebusites, the original inhabitants of the land, were living.The people of Jebus taunted David, saying, “You’ll never get in here!” But David captured the fortress of Zion, which is now called the City of David.”

Zion in the New Testament

In the New Testament we can see that Zion also refers to the heavenly Jerusalem that will be built. And in 1 Peter, Zion is used in reference to the body of Christ.

10) Hebrews 12:22-24 “But you have come to Mount Zion and to the city of the living God, the heavenly Jerusalem, and to innumerable angels in festal gathering.” 23 And to the assembly of the firstborn who are enrolled in heaven, and to God, the judge of all, and to the spirits of the righteous made perfect, 24 and to Jesus, the mediator of a new covenant, and to the sprinkled blood that speaks a better word than the blood of Abel.”

12) 1 Peter 2:6 “Wherefore also it is contained in the scripture, Behold, I lay in Sion a chief corner stone, elect, precious: and he that believeth on him shall not be confounded.”

What is Mount Zion?

Zion in the Old Testament is synonymous with Jerusalem. Mount Zion is one of the small ridges that is in Jerusalem. The other ridges are Mount Moriah (The Temple Mount) and Mount of Olives. Zion is the City of David

13) Psalm 125:1 “A Song of Ascents. Those who trust in the Lord are like Mount Zion, which cannot be moved, but abides forever.”

14) Joel 2:32 “And it shall come to pass that everyone who calls on the name of the Lord shall be saved. For in Mount Zion and in Jerusalem there shall be those who escape, as the Lord has said, and among the survivors shall be those whom the Lord calls.”

15) Psalm 48:1-2 “A Song. A Psalm of the Sons of Korah. Great is the Lord and greatly to be praised in the city of our God! His holy mountain, beautiful in elevation, is the joy of all the earth, Mount Zion, in the far north, the city of the great King.”

What does Daughter of Zion mean?

The term Daughter of Zion is used several times in the Old Testament most often in the books of poetry and prophecy. Daughter of Zion is not a specific person, rather, it is a metaphor for the people of Israel showing the similarities between a loving relationship between a father and his daughter.

17) 2 Kings 19:21 “A people confident in the deliverance of their God. When Assyria threatened Jerusalem, King Hezekiah went to the Lord. In response, God sent Isaiah to reassure Hezekiah that Jerusalem would not fall to Assyria, and God considered the threatening insult to “the virgin daughter of Zion” as a personal affront to Himself.”

18) Isaiah 1:8 “A hut, abandoned after judgment came to an evil family. Here, Isaiah compares the rebellion of Judah to a sick body in a devastated land. The daughter of Zion is left as a lone remnant—a shelter hidden in the vineyard or a hut in a cucumber field that barely escaped destruction.”

19) Jeremiah 4:31 “A woman in labor, helpless before attackers. The steadfastness of Hezekiah was rare in Judah—most kings encouraged rebellion against God instead of loyalty to God. Jeremiah warns that if the nation does not turn away from evil, God will punish them severely. And the people will be helpless against it—as helpless as a woman in labor.”

20)  Isaiah 62:11 “A people awaiting salvation. After the punishment of exile, God promises restoration to Israel. He will rejoice over His chosen people again. And in verse 11, He promises the daughter of Zion, “Lo, your salvation comes; behold His reward is with Him, and His recompense before Him.”

21) Micah 4:13 “A bull that threshes his enemies. In verse 10, God warns that the daughter of Zion will suffer as much as a woman in labor. But in verse 13, He promises vengeance. The weak, powerless woman will become a bull with horns of iron and hoofs of bronze that will crush its enemies.”

22) Zechariah 9:9 “A land awaiting its king. This prophecy promises Israel’s enemies will be destroyed, but also speaks about a more permanent solution to the problem of sin. “Rejoice greatly, O daughter of Zion! Should in triumph, O daughter of Jerusalem! Behold, your king is coming to you; he is just and endowed with salvation, humble, and mounted on a donkey, even on a colt, the foal of a donkey.” Despite the consistent rebellion of the daughter of Zion against her Father, He promises to restore her and present her with a Deliverer-King in the form of Jesus.”

God’s continual love for His people

It is through studying Zion that we can understand God’s continual love for His people. God the Father loving His people in the same way that a father adores his daughter. Zion is symbolic for Hope – our King will return.

24) Isaiah 28:16 “Therefore thus says the Lord God, “Behold, I am the one who has laid as a foundation in Zion, a stone, a tested stone, a precious cornerstone, of a sure foundation: ‘Whoever believes will not be in haste.”

25) Revelation 14:1-3 “Then I looked, and behold, on Mount Zion stood the Lamb, and with him 144,000 who had his name and his Father’s name written on their foreheads. And I heard a voice from heaven like the roar of many waters and like the sound of loud thunder. The voice I heard was like the sound of harpists playing on their harps, and they were singing a new song before the throne and before the four living creatures and before the elders. No one could learn that song except the 144,000 who had been redeemed from the earth.”

Next: Christianity Vs Jehovah Witness