Many people wonder is voodoo real and does voodoo work? Plain and simple yes, but it is not to be messed with. Things like necromancy, and black magic are of the devil and we have no business messing with these things. Dabbling with astral projection or anything of the occult will have some serious consequences. 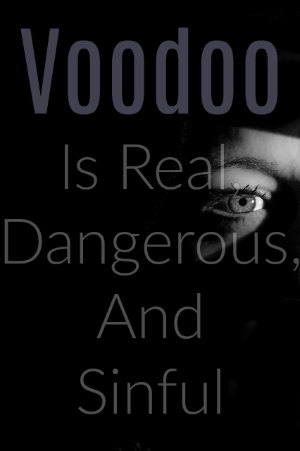 I know people who have dabbled with divination and they are still suffering for it today. Watch out there are many voodoo spell sites claiming that voodoo spirits are neither good nor evil, but that is a lie from Satan. I did a Google search and was burdened to find out that thousands of people a month are typing in things such as “voodoo love spells” and “love spells that work”

Don’t allow yourself to get caught up in the deception. Just because you are not using it as a means to harm others does not mean that it won’t harm you and those around you. Satan perverts the things of God. Just like God uses us to witness to others, Satan uses people to deceive others.

Believers are given the power of God. However, Satan also has power himself. Satan’s power always comes at a cost. It’s awful when I hear about people involved in witchcraft and demonism and they assume that because it is being used for good reasons, that means it’s not of the devil. False! It is always of the devil. Satan knows how to deceive people.

The Bible says in Revelation 12:9 that Satan is “the deceiver of the whole world.” 2 Corinthians 11:3 reminds us that Eve was deceived by the cunning ways of Satan. Satan knows how to trick the vulnerable. God is not glorified when you praise Him for something that was never of Him in the first place.

Is voodoo a religion?

Yes, in some areas voodoo is practiced as a religion. When voodoo rituals are performed most of the time it is done with Catholic items such as rosary beads, Catholic candles, etc.

Many people in different countries are going to voodoo doctors for healing and they praise the Lord for the outcome. God doesn’t work like that. You can’t put a Christian tag on something that is already forbidden.

Once again, I’ve had various friends who were involved in witchcraft but they also sought the Lord. You can’t play both sides. I immediately noticed how they changed rapidly and they were consumed by the very thing that seemed to help them. Satan will always show you the beginning but never the consequences of your actions.

Saul learned that the hard way. 1 Chronicles 10:13 “Saul died because he was unfaithful to the LORD; he did not keep the word of the LORD and even consulted a medium for guidance.”

Things people use voodoo for

Places where voodoo is practiced

Voodoo is practiced all around the world. A few notable counties that practice voodoo are Benin, Haiti, Ghana, Cuba, Puerto Rico, Dominican Republic, and Togo.

The Word voodoo is a West African word that means spirit. Voodoo priests and worshippers connect with spirits that are not of God as a form of ritualism and divination. God forbids such things as divination and He does not share His glory with false gods.

Deuteronomy 18:9-13 “When you enter the land the Lord your God is giving you, you must not learn the abhorrent practices of those nations. There must never be found among you anyone who sacrifices his son or daughter in the fire, anyone who practices divination, an omen reader, a soothsayer, a sorcerer, one who casts spells, one who conjures up spirits, a practitioner of the occult, or a necromancer. Whoever does these things is abhorrent to the Lord and because of these detestable things the Lord your God is about to drive them out from before you. You must be blameless before the Lord your God.”

1 Samuel 15:23 “For rebellion is like the sin of divination, and arrogance like the evil of idolatry. Because you have rejected the word of the LORD, he has rejected you as king.”

Ephesians 2:2 “in which you used to live when you followed the ways of this world and of the ruler of the kingdom of the air, the spirit who is now at work in those who are disobedient.”

Can voodoo kill you?

Yes, and it is being used today to harm people. Not only does it harm the intended target but it also harms the one carrying it out.

Although the world tries to joke around and make voodoo toys, things such as voodoo dolls are not a joke. Voodoo has the power to make people lose their minds.

There are many voodoo related deaths in Africa and Haiti. Unbelievers are unprotected and Satan can indeed kill people. We must always remember what Proverbs 14:12 says, “there is a way that seems right to a man, but its end is the way to death.”

John 8:44 “You are of your father the devil, and your will is to do your father’s desires. He was a murderer from the beginning, and does not stand in the truth, because there is no truth in him. When he lies, he speaks out of his own character, for he is a liar and the father of lies.”

Can voodoo harm Christians? Should we fear it?

God’s Word is greater than the lies of Satan. If you are a Christian, you can be confident in your God to protect you from the enemy. Nothing that you go through is ever outside of God’s control. Can anything remove God’s Spirit living inside of you? Of course not!

Romans 8:38-39 tells us that, “neither death nor life, neither angels nor demons, neither the present nor the future, nor any powers, neither height nor depth, nor anything else in all creation, will be able to separate us from the love of God that is in Christ Jesus our Lord.”

1 John 5:17-19 “All wrongdoing is sin, and there is sin that does not lead to death. We know that anyone born of God does not continue to sin; the One who was born of God keeps them safe, and the evil one cannot harm them. We know that we are children of God, and that the whole world is under the control of the evil one.”

Since I’m Christian can I practice voodoo?

No, you cannot. There are many wiccans who claim to be Christian, but they are deceiving themselves. A Christian does not live a lifestyle of darkness and rebellion. Our desires are for Christ. There is no such thing as good magic or a Christian witch. Stay away from sorcery. Messing with occultism will open your body up to evil spirits. God will not be mocked. God has nothing to do with the evil deeds of darkness. When we truly walk with Christ we are able to identify sin. When we truly walk with Christ we transform our minds and we begin to care about what He cares about. As a believer never say, “I’m only going to try it once.” Never give Satan an opportunity and never try to dabble with the deceitfulness of sin.

Leviticus 20:27 “A man or a woman who is a medium or a necromancer shall surely be put to death. They shall be stoned with stones; their blood shall be upon them.”

Leviticus 19:31 “Do not turn to spirits of the dead, and do not inquire of familiar spirits, to be defiled by them. I am the LORD your God.”

Are you saved? Please click this link to learn how to be saved.