The Second Coming Of Jesus Christ

Bible verses about the Second Coming Of Jesus Christ 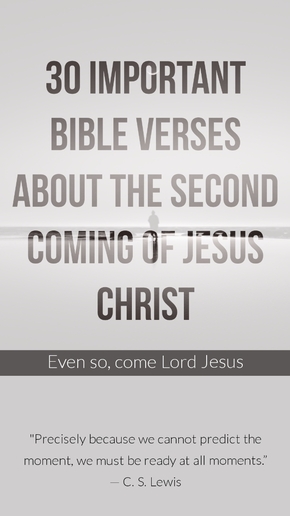 What is the Second Coming of Jesus Christ?

This is final chapter in the story of our redemptive history. The Second Coming of Christ. This is the day that all things will be righted. Jesus will return in order to judge the living and the dead, and to raise the dead from their graves, and remove every trace of sin and its corruption.

1)     1 Thessalonians 4:16-17 “For the Lord himself will descend from heaven with a cry of command, with the voice of an archangel, and with the sound of the trumpet of God. And the dead in Christ will rise first. Then we who are alive, who are left, will be caught up together with them in the clouds to meet the Lord in the air, and so we will always be with the Lord.”

2)     Hebrews 9:28 “So Christ, having been offered once to bear the sins of many, will appear a second time, not to deal with sin but to save those who are eagerly waiting for him.”

3)     Revelation 1:7 “Behold, he is coming with the clouds, and every eye will see him, even those who pierced him, and all tribes of the earth will wail on account of him. Even so. Amen.”

4)      Acts 1:10-11 “And while they were gazing into heaven as he went, behold, two men stood by them in white robes, and said, “Men of Galilee, why do you stand looking into heaven? This Jesus, who was taken up from you into heaven, will come in the same way as you saw him go into heaven.”

5)     Acts 17:31 “Because he has fixed a day on which he will judge the world in righteousness by a man whom he has appointed; and of this he has given assurance to all by raising him from the dead.”

The difference between the First And Second Coming Of Christ

Christ’s first coming occurred in a manger in Bethlehem. He arrived in a lowly and humble way. He arrived as a part of God’s plan: to redeem God’s children. This time, He will return in all His Glory as the King of all the earth.

6)     John 14:1-3 “Let not your hearts be troubled. Believe in God; believe also in me. In my Father’s house are many rooms. If it were not so, would I have told you that I go to prepare a place for you? And if I go and prepare a place for you, I will come again and will take you to myself, that where I am you may be also.”

What Is the difference between the Rapture and the Second Coming?

7)      2 Peter 3:10 “But the day of the Lord will come like a thief, and then the heavens will pass away with a roar, and the heavenly bodies will be burned up and dissolved, and the earth and the works that are done on it will be exposed.”

8)     1 Thessalonians 4:13-18 “But we do not want you to be uninformed, brothers, about those who are asleep, that you may not grieve as others do who have no hope. For since we believe that Jesus died and rose again, even so, through Jesus, God will bring with him those who have fallen asleep. For this we declare to you by a word from the Lord, that we who are alive, who are left until the coming of the Lord, will not precede those who have fallen asleep. For the Lord himself will descend from heaven with a cry of command, with the voice of an archangel, and with the sound of the trumpet of God. And the dead in Christ will rise first. Then we who are alive, who are left, will be caught up together with them in the clouds to meet the Lord in the air, and so we will always be with the Lord.”

What happens at the Second Coming of Christ?

The Lord Jesus will arrive in the Clouds. A trumpet will sound. This will be a personal and visible return. Everyone on earth will see Him at once. He will arrive with great power and glory. His first coming was humble, and He arrived as servant. Now, the King has returned. Everyone will know that it is Him. There will be no questions about who it is.

10) Matthew 16:27 “For the Son of Man is going to come with his angels in the glory of his Father, and then he will repay each person according to what he has done.”

11) Matthew 24:27 “For as the lightning comes from the east and shines as far as the west, so will be the coming of the Son of Man.”

12) Colossians 3:4 “When Christ who is your life appears, then you also will appear with him in glory.”

14)  1 John 3:2-3 “Beloved, we are God’s children now, and what we will be has not yet appeared; but we know that when he appears we shall be like him, because we shall see him as he is. And everyone who thus hopes in him purifies himself as he is pure.”

16) Revelation 1:7 “Look, he is coming with the clouds, and every eye will se him, even those who pierced him; and all the people of the earth will mourn because of Him. So shall it be! Amen!”

Signs of the Second Coming

The flesh and the world hates God. Therefore, they had Christ. And if they hate Him, then they will hate us too. The church will suffer persecution as the time draws near. We have been promised this. The world will increasingly become wicked and boast of their sins. We should not look for society to improve – because it will only get worse.

17) 1 Thessalonians 5:2 “For you yourselves are fully aware that the day of the Lord will come like a thief in the night.”

18) Matthew 24:3-14 “As he sat on the Mount of Olives, the disciples came to him privately, saying, “Tell us, when will these things be, and what will be the sign of your coming and of the end of the age?” And Jesus answered them, “See that no one leads you astray. For many will come in my name, saying, ‘I am the Christ,’ and they will lead many astray. And you will hear of wars and rumors of wars. See that you are not alarmed, for this must take place, but the end is not yet. For nation will rise against nation, and kingdom against kingdom, and there will be famines and earthquakes in various places. 8 All these are but the beginning of the birth pains. “Then they will deliver you up to tribulation and put you to death, and you will be hated by all nations for my name’s sake.  And then many will fall away and betray one another and hate one another. And many false prophets will arise and lead many astray. And because lawlessness will be increased, the love of many will grow cold. But the one who endures to the end will be saved. And this gospel of the kingdom will be proclaimed throughout the whole world as a testimony to all nations, and then the end will come.”

Why is Jesus taking so long to return?

Though we do not know the exact day or our that Christ will return, we should live as though we are in the Last Days – because Christ says He is returning as quickly as He is able to. In His love He is patiently waiting for all of His Children to come to Him. He will not linger a second longer than necessary.

20) 2 Peter 3:8-9 “But do not forget this one thing, dear friends: With the Lord a day is like a thousand years, and a thousand years are like a day. 9 The Lord is not slow in keeping his promise, as some understand slowness. Instead he is patient with you, not wanting anyone to perish, but everyone to come to repentance.”

21) James 5:7 “Be patient, therefore, brothers, until the coming of the Lord. See how the farmer waits for the precious fruit of the earth, being patient about it, until it receives the early and the late rains.”

How should Christians live as we wait for Christ?

We must stay vigilant and ready. He can come back at any moment. We can take comfort in knowing that God will not allow the wicked to accomplish their evil plans. The wicked will not prevail. God is King. We must live each moment for His glory and take His message of the Gospel to all of the world.

23) Matthew 24:36 “But concerning that day and hour no one knows, not even the angels of heaven, nor the Son, but the Father only.”

24) Luke 21:34-36 “But watch yourselves lest your hearts be weighed down with dissipation and drunkenness and cares of this life, and that day come upon you suddenly like a trap. For it will come upon all who dwell on the face of the whole earth. But stay awake at all times, praying that you may have strength to escape all these things that are going to take place, and to stand before the Son of Man.”

25) Matthew 24:42-44 “Therefore, stay awake, for you do not know on what day your Lord is coming. But know this, that if the master of the house had known in what part of the night the thief was coming, he would have stayed awake and would not have let his house be broken into. Therefore you also must be ready, for the Son of Man is coming at an hour you do not expect.”

26) 1 Thessalonians :9-10 “For they themselves report concerning us the kind of reception we had among you, and how you turned to God from idols to serve the living and true God, and to wait for his Son from heaven, whom he raised from the dead, Jesus who delivers us from the wrath to come.”

We must look to the Second Coming with excitement and hope! Our Lord is sure to keep His promises – He is safe to trust. We must live obediently and pray for His return each day.

Even so, come Lord Jesus!

27)  Titus 2:13 “Waiting for our blessed hope, the appearing of the glory of our great God and Savior Jesus Christ”

29)  Jude 1:21 “Keep yourselves in the love of God as you await the mercy of our Lord Jesus Christ to bring you eternal life.”

Next: Bible Verses About Sex