Since the beginning of the Christian church there has been interest in prophecy. The early church looked at Scriptures and saw the fulfillment of Christ, and throughout the ages many theories have been developed regarding the second coming of our Lord. The question that this paper considers is whether the method of interpretation, known as dispensationalism, is the key to understanding Bible prophecy. 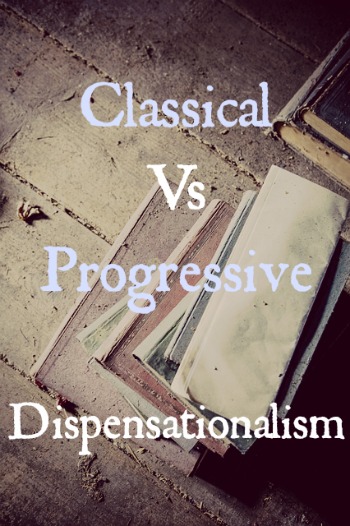 To arrive at the conclusion a few distinctions must be made. Dispensationalism is premillennial in nature and believes that the 1,000-year reign of Christ on earth is literal.  This is in sharp contrast to the amillenial interpretation that sees it as allegorical. One must also know the difference between the varying forms of dispensationalism that are present in eschatology.

Dispensationalism is perhaps a key reason why evangelicals have such a concern with what happens to the nation of Israel. Regarding this Dr. Timothy Jones writes, “Dispensationalism emphasizes the differences and discontinuity between the physical descendants of Abraham and followers of Jesus[2]. Though dispensationalism is a fairly new term, some of the ideas have been around since the earliest days of the church. Its main developer was John Darby, and became popular with the release of the Schofield reference bible[3]. It is a system of biblical interpretation that looks to the inerrancy of scripture, and seeks to interpret the biblical text in a literal way.

It does this by using a type of dualism by which God pursues two different purposes for redemption. These purposes are in regards to heaven and earth[4]. Through this redemption man is restored to the status that Adam and Eve had before the fall, which in effect, leads to immortality and life everlasting on earth. The second purpose involved those in heaven who died during the various dispensations. This heavenly purpose is made of individuals who died, but were saved.

Classic dispensationalism looks at the Word of God and sees a series of dispensations under which God managed the world. Though there is some dispute about how many dispensations there are, the following seven are the most common: innocence, conscience, human government, promise, law, grace, and the seventh will come in the future.  Regarding the seventh dispensation Dr. Blaising writes, “Christ will confirm the two purposes, first in the millennium, which tests humanity one last time before the judgment, and then in eternity[5].”

Another hallmark of classic dispensationalism is in regard to the nature of the church and Israel. This is part of the key to understanding scripture in this system. Throughout the Old Testament, from the covenants made with Adam and David, the church is never mentioned. God made his covenants with Israel, and the prophecies regarding Israel will be fulfilled in Israel. This goes contrary to other systems, such as amillenialism, which see these prophecies fulfilled in the church.

The fulfillment of the prophecies with Israel lead to the seventh dispensation, which is known as the millennium. This is also known as the 1,000-year reign of Christ on earth and is believed to be a literal event. Regarding this change in dispensations Dr. Blaising writes, “This dispensational change also marked a shift in focus in the purpose of God, from the church to Israel, or as classic dispensationalists put it more generally, from the heavenly people to the earthly people[6].” It interprets the New Covenant as being separate from the Old Covenant, and the old covenant with Israel never being revoked and finding fulfillment in the millennium.

In regards to this Dr. Blaising writes, “The appearance of the church does not signal a secondary redemption plan, either to be fulfilled in heaven apart from the new earth or in an elite class of Jews and Gentiles who are forever distinguished from the rest of humanity. Instead, the church today is a revelation of spiritual blessings which all the redeemed will share despite their ethnic and spiritual differences[7].”

The covenants were given to the prophets and kings of Israel, but some have not been fulfilled. However, they have the beginnings of their fulfillment within the context of the New Testament Church. The coming of Jesus, His Kingship, and the millennium will be the ultimate fulfillment of the covenants. Jesus states several times in scripture that He will come back at an unknown hour to judge the nations and claim what is His. He is coming for His bride, which is the church.

In conclusion, the key to Bible prophecy is seen best in progressive dispensationalism.  It has its critics since it was introduced in the 1970’s, which in theological circles, is still very new. Though it is new it is built upon several centuries of great theological thought. Dispensational ideas can be seen in the church father Irenaeus who lived in the second century.

For Bible prophecy to be fulfilled Israel must take part in some fashion. Progressive dispensationalism holds that there is no separation between the church and Israel. As a result, all who believe in Christ are adopted sons and daughters and are grafted into Israel as Ephesians 1:5 states. The New Covenant succeeds the old ones, and as a result all believers, Jew and gentile are included in the redemptive plan.

Next: Bible Verses About Racism And Discrimination