Old age is a blessing from the Lord. We should never be afraid of aging. Christians have a responsibility to show kindness, respect, and to take care of the elderly. Yes we are to respect all people, but there is a certain type of respect that we give to the elderly unlike our own age group. There is a certain way we talk to them and give honor to them. 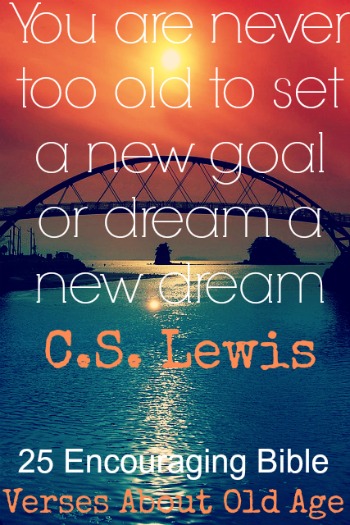 When living by the Word of God old age brings wisdom that is able to help and guide others in need. Old Christian men and women have a duty to help the younger generation.

I have learned a lot from elderly Christians. Sometimes all you want to hear is how God has worked in someone’s life and their different experiences.

Old aged people have been through many different hardship experiences that will help your walk of faith. They have made mistakes and they will help guide you so you don’t make the same mistakes. No matter what age Christians should never fear death.

We have confidence that we will be with our Lord and Savior Jesus Christ. Our body may appear older, but our insides are being renewed daily. An elderly Christian never truly gets old. You only get old when you stop seeking the advancement of the kingdom of God.

You only get old when you cease building up others in Christ and turn to watching television all day. This is the sad truth for some elderly believers.

Many have lost their zeal for Christ and choose to live out their days in front of the television. Christ became perfection on your behalf and died for your iniquities. Life will never stop being all about Christ. Always remember that you’re still alive for a reason.

1. Ruth 4:15 He will renew your life and sustain you in your old age. For your daughter-in-law, who loves you and who is better to you than seven sons, has given him birth.”

Old people carry so much wisdom and they give great advice.

4. Job 12:12 Wisdom belongs to the aged, and understanding to the old.

5. 1 Kings 12:6 There were some older men who had helped Solomon make decisions when he was alive. So King Rehoboam asked these men what he should do. He said, “How do you think I should answer the people?”

The godly continue to bear fruit and praise the Lord.

7. Psalm 92:12-14 But the godly will flourish like palm trees and grow strong like the cedars of Lebanon. For they are transplanted to the LORD’s own house. They flourish in the courts of our God. Even in old age they will still produce fruit; they will remain vital and green. They will declare, “The LORD is just! He is my rock! There is no evil in him!”

8. Proverbs 16:31 Gray hair is a crown of glory; it is obtained by following a righteous path.

9. Proverbs 20:29 The glory of the young is their strength; the gray hair of experience is the splendor of the old.

Even at an old age we must do God’s work. The advancement of God’s kingdom never stops.

10. Psalm 71:18-19 Now that I am old and my hair is gray, don’t leave me, God. I must tell the next generation about your power and greatness. God, your goodness reaches far above the skies. You have done wonderful things. God, there is no one like you.

11. Exodus 7:6-9 So Moses and Aaron did just as the LORD had commanded them. Moses was eighty years old, and Aaron was eighty-three when they made their demands to Pharaoh. Then the LORD said to Moses and Aaron, “Pharaoh will demand, ‘Show me a miracle.’ When he does this, say to Aaron, ‘Take your staff and throw it down in front of Pharaoh, and it will become a serpent.'”

God still answers the prayers of the elderly.

12. Genesis 21:1-3 Now the LORD was gracious to Sarah as he had said, and the LORD did for Sarah what he had promised.  Sarah became pregnant and bore a son to Abraham in his old age, at the very time God had promised him. Abraham gave the name Isaac to the son Sarah bore him.

13. 1 Timothy 5:1 Do not rebuke an older man harshly, but exhort him as if he were your father. Treat younger men as brothers.

14. Leviticus 19:32 “Rise in the presence of the aged and honor the elderly face-to-face. “Fear your God. I am the LORD.

15. Job 32:4 Because Elihu was the youngest one there, he had waited until everyone finished speaking.

God will work in all His children to conform them into the image of Christ until the end.

16. Philippians 1:6 For I am sure of this very thing, that the one who began a good work in you will perfect it until the day of Christ Jesus.

17. 1 Corinthians 1:8-9 He will also strengthen you to the end, so that you will be blameless on the day of our Lord Jesus Christ. God is faithful, by whom you were called into fellowship with his son, Jesus Christ our Lord.

18. Ecclesiastes 7:10 Never ask “Why does the past seem so much better than now?”  because this question does not come from wisdom.

19. Isaiah 40:31 but those who keep waiting for the LORD will renew their strength. Then they’ll soar on wings like eagles; they’ll run and not grow weary; they’ll walk and not grow tired.”

20. 2 Corinthians 4:16-17 That is why we are not discouraged. Though outwardly we are wearing out, inwardly we are renewed day by day. Our suffering is light and temporary and is producing for us an eternal glory that is greater than anything we can imagine.

21. Proverbs 17:6 Grandchildren are the crown of the aged, and the glory of children is their fathers.

22. Genesis 24:1 Abraham was now a very old man, and the LORD had blessed him in every way.

23. Genesis 25:7-8 Abraham lived for 175 years, and he died at a ripe old age, having lived a long and satisfying life. He breathed his last and joined his ancestors in death.

25. Philemon 1:9 I prefer to make my appeal on the basis of love. I, Paul, as an old man and now a prisoner of the Messiah Jesus.

Next: Bible Verses About Slander