As Christians we are to always be humble and never brag about anything, but there are some people without you even bragging who might be jealous of your achievements.

Hating and bitterness is a sin and can be brought on by getting a new job or promotion, buying a new house, buying a new car, relationships, and even something like giving to charity can bring haters. 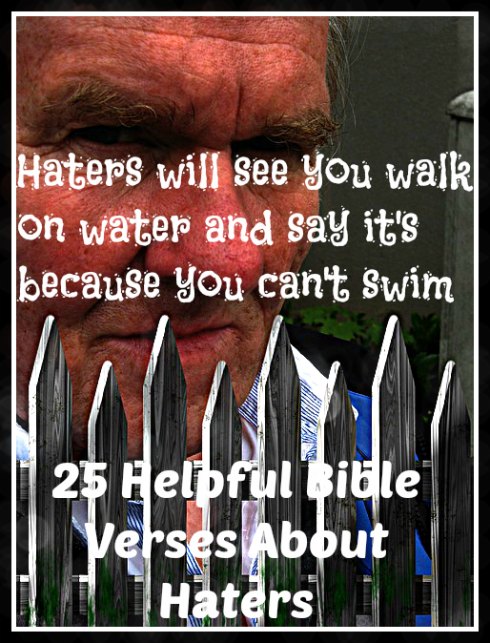 There are four types of haters. There are the ones who criticize you and find a fault for everything you do out of jealousy. The ones who try to make you look bad in front of others.

The ones who purposely bring you down so you won’t succeed instead of helping you and there are the haters who hate behind your back and destroy your good name with slander. Most of the time haters are the closest people to you. Let’s learn more.

How to not be a hater?

1.  1 Peter 2:1-2 Therefore, rid yourselves of every kind of evil and deception, hypocrisy, jealousy, and every kind of slander. Like newborn babies, thirst for the pure milk of the word so that by it you may grow in your salvation.

3. Ephesians 4:31 Get rid of all bitterness, rage, anger, harsh words, and slander, as well as all types of evil behavior.

4. Galatians 5:25-26 Since we live by the Spirit, let us keep in step with the Spirit. Let us not become conceited, provoking and envying each other.

5. Romans 1:29 They were filled with all manner of unrighteousness, evil, covetousness, malice. They are full of envy, murder, strife, deceit, maliciousness. They are gossips.

6. Proverbs 26:24-26 A hateful person disguises himself with his speech and harbors deceit within. When he speaks graciously, don’t believe him, for there are seven abominations in his heart. Though his hatred is concealed by deception, his evil will be revealed in the assembly.

7. Psalm 41:6 When someone comes to visit, he pretends to be friendly; he thinks of ways to defame me, and when he leaves he slanders me.

8. Psalm 12:2 Neighbors lie to each other, speaking with flattering lips and deceitful hearts.

Many times haters hate for no reason.

9. Psalm 38:19 Many have become my enemies without cause; those who hate me without reason are numerous.

10. Psalm 69:4 Those who hate me without reason outnumber the hairs of my head; many are my enemies without cause, those who seek to destroy me. I am forced to restore what I did not steal.

11. Psalm 109:3 They encircle me with words of hate, and attack me without cause.

12. Proverbs 11:9 With his mouth the godless man would destroy his neighbor, but by knowledge the righteous are delivered.

14. Psalm 109:2 for people who are wicked and deceitful have opened their mouths against me; they have spoken against me with lying tongues.

15. Proverbs 10:18 The one who conceals hatred has lying lips, and whoever utters slander is a fool.

Do not be envious of people who do wrong.

18. Psalm 37:7 Be still in the presence of the LORD, and wait patiently for him to act. Don’t worry about evil people who prosper or fret about their wicked schemes.

19. Proverbs 19:11 Good sense makes one slow to anger, and it is his glory to overlook an offense.

20. 1 Peter 3:16 Having a good conscience, so that, when you are slandered, those who revile your good behavior in Christ may be put to shame.

21. Ephesians 4:32 Instead, be kind to each other, tenderhearted, forgiving one another, just as God through Christ has forgiven you.

22. 1 Peter 3:9 Do not repay evil for evil or reviling for reviling, but on the contrary, bless, for to this you were called, that you may obtain a blessing.

24.  Mark 15:7-11 There was one named Barabbas, who was in prison with rebels who had committed murder during the rebellion. The crowd came up and began to ask Pilate to do for them as was his custom. So Pilate answered them, “Do you want me to release the King of the Jews for you?” For he knew it was because of envy that the chief priests had handed Him over. But the chief priests stirred up the crowd so that he would release Barabbas to them instead.

25.  1 Samuel 18:6-9 As the troops were coming back, when David was returning from killing the Philistine, the women came out from all the cities of Israel to meet King Saul, singing and dancing with tambourines, with shouts of joy, and with three-stringed instruments. As they celebrated, the women sang: Saul has killed his thousands, but David his tens of thousands. Saul was furious and resented this song. “They credited tens of thousands to David,” he complained, “but they only credited me with thousands. What more can he have but the kingdom?” So Saul watched David jealously from that day forward.

Next: Bible Verses About Fools