Many people ask questions like are there ghosts in the Bible? Are ghosts real? No! I want to be clear that by ghosts I mean a dead person’s spirit. A person who has died and their spirit lives on in a haunted house or something like this. 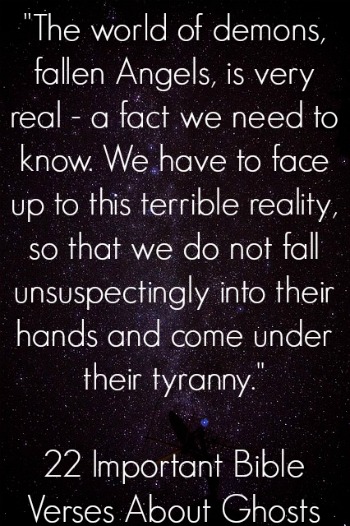 This is only in movies, but there are demons and evil spirits that can impersonate deceased people and deceased family members. Let’s learn more below.

“The world of demons, fallen Angels, is very real – a fact we need to know. We have to face up to this terrible reality, so that we do not fall unsuspectingly into their hands and come under their tyranny.” Basilea Schlink

You can’t talk to the dead. The dead can’t come back from the dead. Once a person dies it is either they go to heaven or hell. You don’t have an option to be a ghost and haunt someone’s house and I will show you from Scripture.

1. Job 7:9-10 “As a cloud fades away and vanishes, so the one who goes down to Sheol will never rise again. He will never return to his house; his hometown will no longer remember him.”

2. 2 Corinthians 5:8-9 “We are confident, I say, and willing rather to be absent from the body, and to be present with the Lord. Wherefore we labour, that, whether present or absent, we may be accepted of him.”

3. Hebrews 9:27 “And just as it is destined that men die only once, and after that comes judgment.”

4. Matthew 25:46 “These people will go away into eternal punishment, but the righteous will go into eternal life.”

5. Ecclesiastes 12:7 “Then man’s dust will go back to the earth, returning to what it was, and the spirit will return to the God who gave it.”

We always hear about those stories that have to do with hauntings. People come back for revenge to claim their house, but what does Scripture say?

6. Psalm 146:4 “For his spirit goes out and he returns to his earth and in that day all his thoughts are destroyed.”

7. Ecclesiastes 9:5-6 “For the living know that they will die, but the dead know nothing; they have no further reward, and even their name is forgotten. Their love, their hate and their jealousy have long since vanished; never again will they have a part in anything that happens under the sun.”

Another name for Satan is the deceiver.

He seeks to deceive as many people as he can and of course demons do the same thing. You may hear about people going to psychics and talking to dead family member, but once again those are just demons impersonating the deceased and deceiving people.

All the different ghostly activities, ghost stories, haunted mansions, etc. are all the work of demons. Watch out for people like ghost hunters who try to profit off of this.

8. 2 Corinthians 2:11 “I have done this so that we may not be taken advantage of by Satan. For we are not ignorant of his schemes.”

9. 2 Corinthians 11:14-15 “And no wonder, for even Satan disguises himself as an angel of light. Therefore it is not surprising his servants also disguise themselves as servants of righteousness, whose end will correspond to their actions.”

10. John 10:10 “A thief comes only to steal and to kill and to destroy. I have come so that they may have life and have it in abundance.”

11. Ephesians 6:11 “Put on the full armor of God, so that you will be able to stand firm against the schemes of the devil.”

There are some people that might say, “didn’t Saul talk to Samuel’s ghost?”

12. 1 Samuel 28:13-15 “The king said to her, “Do not be afraid; but what do you see?” And the woman said to Saul, “I see a divine being coming up out of the earth.” He said to her, “What is his form?” And she said, “An old man is coming up, and he is wrapped with a robe.” And Saul knew that it was Samuel, and he bowed with his face to the ground and did homage. Then Samuel said to Saul, “Why have you disturbed me by bringing me up?” And Saul answered, “I am greatly distressed; for the Philistines are waging war against me, and God has departed from me and no longer answers me, either through prophets or by dreams; therefore I have called you, that you may make known to me what I should do.”

There are evil spirits/fallen angels in this world.

13. Revelation 12:9 “And the great dragon was thrown down, the serpent of old who is called the devil and Satan, who deceives the whole world; he was thrown down to the earth, and his angels were thrown down with him.”

14. Matthew 10:1 “And he called to him his twelve disciples and gave them authority over unclean spirits, to cast them out, and to heal every disease and every affliction.”

You don’t have to be afraid because they can’t harm Christians we have the Holy Spirit living inside of us. Believers are protected.

15. 1 John 4:4 “You are from God, little children, and you have conquered them, because the One who is in you is greater than the one who is in the world.”

16. 2 Corinthians 1:21-22 “And it is God who establishes us with you in Christ, and has anointed us, and who has also put his seal on us and given us his Spirit in our hearts as a guarantee.”

17. 1 John 5:18 “We know that everyone who has been born of God does not sin, but the One who is born of God keeps him, and the evil one does not touch him.”

But that does not mean we are free to indulge in demonic activity such as black magic. We are not to seek evil. It is a sin and it will harm you.

20. Leviticus 19:31 “Do not turn to mediums or consult spiritists, or you will be defiled by them; I am Yahweh your God.”

21. Deuteronomy 18:10-11 “There shall not be found among you any one that maketh his son or his daughter to pass through the fire, or that useth divination, or an observer of times, or an enchanter, or a witch, Or a charmer, or a consulter with familiar spirits, or a wizard, or a necromancer.”

Jesus did not believe in ghosts.

22. Luke 24:37-39 “They were startled and frightened, thinking they saw a ghost. He said to them, “Why are you troubled, and why do doubts rise in your minds? Look at my hands and my feet. It is I myself! Touch me and see; a ghost does not have flesh and bones, as you see I have.”

Next: Witnessing To Others