There are many people who lack knowledge, but rather than trying to find it, they don’t. Fools remain in stupidity and would rather live in evil than learn the way of righteousness. 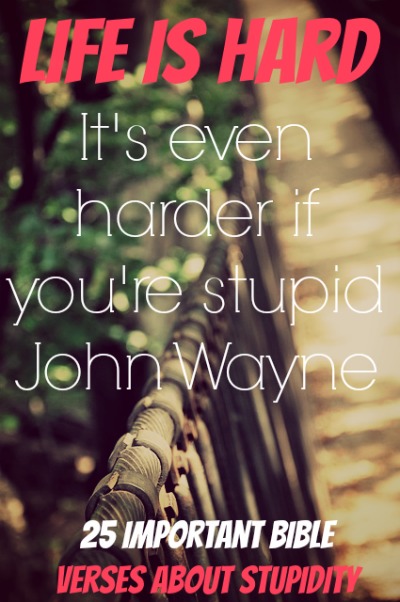 Scripture says that stupid people are people who act rashly, they are lazy, they are quick tempered, they pursue evil, they scoff at rebuke, they reject Christ as their Savior, and they deny God even with the clear evidences in the world.

We are never to trust in our own minds, but put our full trust in the Lord.

Avoid being stupid by meditating on God’s Word, which is good for teaching, rebuking, correcting, and training in righteousness. Learn from your mistakes, don’t keep on repeating the same foolishness.

1. Proverbs 9:13 Folly is an unruly woman; she is simple and knows nothing.

2. Ecclesiastes 7:25 I searched everywhere, determined to find wisdom and to understand the reason for things. I was determined to prove to myself that wickedness is stupid and that foolishness is madness.

3. 2 Timothy 3:7 Always learning and never able to arrive at a knowledge of the truth.

4. Proverbs 27:12 The prudent sees danger and hides himself, but the simple go on and suffer for it.

5. Ecclesiastes 10:1-3 As dead flies give perfume a bad smell, so a little folly outweighs wisdom and honor. The heart of the wise inclines to the right, but the heart of the fool to the left. Even as fools walk along the road, they lack sense and show everyone how stupid they are.

6. Proverbs 14:23-24 In hard work there is always profit, but too much chattering leads to poverty. The crown of the wise is their wealth, but the stupidity of fools is just that—stupidity!

7. Psalm 10:4 The wicked are too proud to seek God. They seem to think that God is dead.

8. Proverbs 12:1 The person who loves correction loves knowledge, but anyone who hates a rebuke is stupid.

9. Jeremiah 10:8-9 People who worship idols are stupid and foolish. The things they worship are made of wood! They bring beaten sheets of silver from Tarshish and gold from Uphaz, and they give these materials to skillful craftsmen who make their idols. Then they dress these gods in royal blue and purple robes made by expert tailors.

10. Jeremiah 10:14-16 Everyone is stupid and without knowledge. Every goldsmith is put to shame by his idols, for his images are false. There is no life in them. They’re worthless, a work of mockery, and when the time of punishment comes, they’ll perish. The Portion of Jacob is not like these. He made everything, and Israel is the tribe of his inheritance. The LORD of the Heavenly Armies is his name.

11. 2 Timothy 2:23-24 Don’t have anything to do with foolish and stupid arguments, because you know they produce quarrels. And the Lord’s servant must not be quarrelsome but must be kind to everyone, able to teach, not resentful.

12. Proverbs 13:16 All who are prudent act with knowledge, but fools expose their folly.

13. Romans 1:21-22 Because that, when they knew God, they glorified him not as God, neither were thankful; but became vain in their imaginations, and their foolish heart was darkened. Professing themselves to be wise, they became fools.

14. Proverbs 17:11-12 A rebellious person seeks evil; a cruel emissary will be sent to oppose him. It’s better to meet a mother bear who has lost her cubs than a fool in his stupidity.

15. Proverbs 15:21 Stupidity is the delight of the senseless, but an understanding man walks uprightly.

16. Proverbs 23:12 Apply your heart to instruction and your ear to words of knowledge.

17. Psalm 119:130 The teaching of your word gives light, so even the simple can understand.

18. Proverbs 14:16-18 One who is wise is cautious and turns away from evil, but a fool is reckless and careless. A man of quick temper acts foolishly, and a man of evil devices is hated. The simple inherit folly, but the prudent are crowned with knowledge.

19. Proverbs 28:26 Whoever trusts his own heart is a fool. Whoever walks in wisdom will survive.

20. Proverbs 3:7 Don’t consider yourself to be wise; fear the LORD and turn away from evil.

21. 1 Corinthians 3:18-20 Let no one deceive himself. If anyone among you thinks that he is wise in this age, let him become a fool that he may become wise. For the wisdom of this world is folly with God. For it is written, “He catches the wise in their craftiness,” and again, “The Lord knows the thoughts of the wise, that they are futile.”

22. Jeremiah 4:22 “For my people are foolish; they know me not; they are stupid children; they have no understanding. They are ‘wise’—in doing evil! But how to do good they know not.”

23. Isaiah 44:18-19 Such stupidity and ignorance! Their eyes are closed, and they cannot see. Their minds are shut, and they cannot think. The person who made the idol never stops to reflect, “Why, it’s just a block of wood! I burned half of it for heat and used it to bake my bread and roast my meat. How can the rest of it be a god? Should I bow down to worship a piece of wood?”

24. Isaiah 19:11-12 The princes of Zoan are utterly foolish; the wisest counselors of Pharaoh give stupid counsel. How can you say to Pharaoh, “I am a son of the wise, a son of ancient kings”? Where then are your wise men? Let them tell you that they might know what the LORD of hosts has purposed against Egypt.

25. Hosea 4:6 My people are destroyed for lack of knowledge; because you have rejected knowledge, I reject you from being a priest to me. And since you have forgotten the law of your God, I also will forget your children.