Scripture makes it clear that psychics are evil and they are an abomination to the Lord. Christians are not to mess with horoscopes, tarot cards, palm readings, etc. When you go to a psychic that is not putting your faith and trust in God, but the devil. 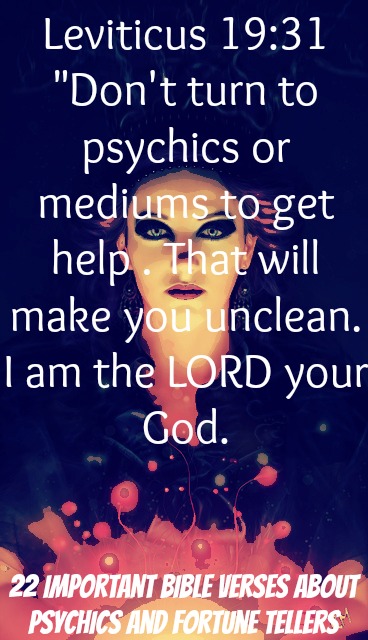 It’s saying God you’re taking too long I need answers now, Satan help me. If God knows your future why do you need to know your future?

Going to a psychic is very dangerous because it can bring demonic spirits. With every visit you will become more attached and fall deeper into darkness.

Even if you think it’s harmless and it’s for good, remember the devil is a liar nothing from darkness is good. With Satan there is always a catch. Don’t play with fire!

1. 2 Corinthians 11:14-15 And no marvel; for Satan himself is transformed into an angel of light. Therefore it is no great thing if his ministers also be transformed as the ministers of righteousness; whose end shall be according to their works.

2. Ephesians 6:11-12 Put on the whole armour of God, that ye may be able to stand against the wiles of the devil. For we wrestle not against flesh and blood, but against principalities, against powers, against the rulers of the darkness of this world, against spiritual wickedness in high places.

3. Jeremiah 10:2 This is what the LORD says: “Do not act like the other nations, who try to read their future in the stars. Do not be afraid of their predictions, even though other nations are terrified by them.

4. Romans 12:2 And do not imitate this world, but be transformed by the renovation of your minds, and you shall distinguish what is the good, acceptable and perfect will of God.

5. Proverbs 4:14-15 Do not set foot on the path of the wicked or walk in the way of evildoers. Avoid it, do not travel on it; turn from it and go on your way.

6. Leviticus 19:31 “Don’t turn to psychics or mediums to get help. That will make you unclean. I am the LORD your God.

7. Leviticus 20:27 “Every man or woman who is a medium or a psychic must be put to death. They must be stoned to death because they deserve to die.”

8. Leviticus 20:6 I will condemn people who turn to mediums and psychics and chase after them as though they were prostitutes. I will exclude them from the people.

9. Deuteronomy 18:10-12 You must never sacrifice your sons or daughters by burning them alive, practice black magic, be a fortuneteller, witch, or sorcerer, cast spells, ask ghosts or spirits for help, or consult the dead. Whoever does these things is disgusting to the Lord. The Lord your God is forcing these nations out of your way because of their disgusting practices.

10. Micah 5:12 I will destroy your witchcraft and you will no longer cast spells.

Paul removes a demon out of a fortune teller.

11. Acts 16:16-19 One day as we were going down to the place of prayer, we met a slave girl who had a spirit that enabled her to tell the future. She earned a lot of money for her masters by telling fortunes. She followed Paul and the rest of us, shouting, “These men are servants of the Most High God, and they have come to tell you how to be saved.” This went on day after day until Paul got so exasperated that he turned and said to the demon within her, “I command you in the name of Jesus Christ to come out of her.” And instantly it left her. Her masters’ hopes of wealth were now shattered, so they grabbed Paul and Silas and dragged them before the authorities at the marketplace.

12. Isaiah 8:19 People will say to you, “Ask for help from the mediums and the fortunetellers, who whisper and mutter.” Shouldn’t people ask their God for help instead? Why should they ask the dead to help the living?

13. James 1:5 But if anyone is deficient in wisdom, he should ask God, who gives to all generously and without reprimand, and it will be given to him.

14. Proverbs 3:5-7  Trust the Lord with all your heart, and do not rely on your own understanding. In all your ways acknowledge him, and he will make your paths smooth. Do not consider yourself wise. Fear the Lord, and turn away from evil.

Saul died for seeking a medium.

15. 1 Chronicles 10:13-14 So Saul died for his transgressions; that is, he acted unfaithfully to the Lord by transgressing the message from the Lord (which he did not keep), by consulting a medium for advice, and by not seeking counsel from the Lord, who therefore put him to death and turned the kingdom over to Jesse’s son David.

16. Revelation 22:15 Outside the city are the dogs–the sorcerers, the sexually immoral, the murderers, the idol worshipers, and all who love to live a lie.

18.  Daniel 5:11 There’s a man in your kingdom who has the spirit of the holy gods. In the days of your grandfather, he was found to have insight, good judgment, and wisdom like the wisdom of the gods. Your grandfather, King Nebuchadnezzar, made him head of the magicians, psychics, astrologers, and fortunetellers.

19. Daniel 5:7 The king screamed for the psychics, astrologers, and fortunetellers to be brought to him. He told these wise advisers of Babylon, “Whoever reads this writing and tells me its meaning will be dressed in purple, wear a gold chain on his neck, and become the third-highest ruler in the kingdom.”

20. Daniel 2:27-28 Daniel answered the king, “No wise adviser, psychic, magician, or fortuneteller can tell the king this secret. But there is a God in heaven who reveals secrets. He will tell King Nebuchadnezzar what is going to happen in the days to come. This is your dream, the vision you had while you were asleep

21. 2 Kings 21:6 And he burned his son as an offering and used fortune-telling and omens and dealt with mediums and with necromancers. He did much evil in the sight of the Lord, provoking him to anger.

22. Daniel 2:10 The astrologers answered the king, “No one on earth can tell the king what he asks. No other king, no matter how great and powerful, has ever asked such a thing of any magician, psychic, or astrologer.

Previous: Growing A Relationship With God

Next: Being Left Handed