The secular world we live in today promotes rebellion. People don’t want to listen to authority. People want to be the god of their own lives. Scripture equates rebellion to witchcraft. Rebellion makes God angry. Jesus didn’t die for your sins so you can live in rebellion and spit on God’s grace. 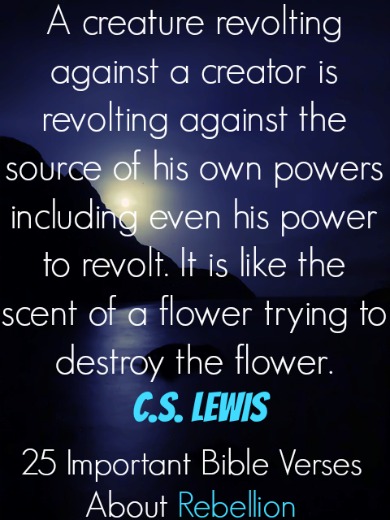 The, “but we’re all sinners excuse” does not justify living in darkness.

There are many ways to live in rebellion such as, living a lifestyle of sin, refusing God’s calling, trusting ourselves rather than trusting in the Lord, being unforgiving, and more.

We must humble ourselves before the Lord. We must continue to examine our lives in the light of Scripture. Repent of your sins.

Trust in the Lord and align your will with His will. Allow the Holy Spirit to guide your life daily.

1. 1 Samuel 15:23 For rebellion is as the sin of divination, and presumption is as iniquity and idolatry. Because you have rejected the word of the LORD, he has also rejected you from being king.

2. Proverbs 17:11 Evil people are eager for rebellion, but they will be severely punished.

3. Psalm 107:17-18 Some were fools through their sinful ways, and because of their iniquities suffered affliction; they loathed any kind of food, and they drew near to the gates of death.

Judgment brought upon the rebellious.

5. Romans 13:1-2 Everyone must submit to the governing authorities, for there is no authority except from God, and those that exist are instituted by God. So then, the one who resists the authority is opposing God’s command, and those who oppose it will bring judgment on themselves.

6. 1 Samuel 12:14-15 Now if you fear and worship the Lord and listen to his voice, and if you do not rebel against the Lord’s commands, then both you and your king will show that you recognize the Lord as your God. But if you rebel against the Lord’s commands and refuse to listen to him, then his hand will be as heavy upon you as it was upon your ancestors.

7. Ezekiel 20:8 But they rebelled against me and would not listen. They did not get rid of the vile images they were obsessed with, or forsake the idols of Egypt. Then I threatened to pour out my fury on them to satisfy my anger while they were still in Egypt.

8. Isaiah 1:19-20 If you will only obey me, you will have plenty to eat. But if you turn away and refuse to listen, you will be devoured by the sword of your enemies. I, the Lord, have spoken!

9. Isaiah 63:10 But they rebelled against him and grieved his Holy Spirit. So he became their enemy and fought against them.

Rebellion leads to hardening your heart.

10. Hebrews 3:15 Remember what it says: “Today when you hear his voice, don’t harden your hearts as Israel did when they rebelled.”

11. Malachi 2:17 You have wearied the LORD with your words. “How have we wearied him?” you ask. By saying, “All who do evil are good in the eyes of the LORD, and he is pleased with them” or “Where is the God of justice?”

People who are in rebellion will explain something away and reject the truth.

12. 2 Timothy 4:3-4 For the time will come when they will not tolerate sound doctrine, but according to their own desires, will multiply teachers for themselves because they have an itch to hear something new. They will turn away from hearing the truth and will turn aside to myths.

Living in a constant state of rebellion is evidence that someone is not a true Christian.

13. Matthew 7:21-23 Not every one that saith unto me, Lord, Lord, shall enter into the kingdom of heaven; but he that doeth the will of my Father which is in heaven. Many will say to me in that day, Lord, Lord, have we not prophesied in thy name? and in thy name have cast out devils? and in thy name done many wonderful works? And then will I profess unto them, I never knew you: depart from me, ye that work iniquity.

14. 1 John 3:8 The one who practices sin is of the devil, because the devil has been sinning from the beginning. For this purpose the Son of God was revealed: to destroy the works of the devil.

We must not rebel against the Word of God.

15. Proverbs 28:9 The one who turns away his ear from hearing the law, even his prayer is an abomination.

16. Psalm 107:11 because they had rebelled against God’s commands, and rejected the instructions of the sovereign king.

If someone is truly a child of God and starts rebelling, then God will discipline that person and bring them to repentance.

17. Hebrews 12:5-6 And ye have forgotten the exhortation which speaketh unto you as unto children, My son, despise not thou the chastening of the Lord, nor faint when thou art rebuked of him: For whom the Lord loveth he chasteneth, and scourgeth every son whom he receiveth.

Correcting someone who rebels against God’s Word.

19. Matthew 18:15-17 If your brother sins against you, go and tell him his fault, between you and him alone. If he listens to you, you have gained your brother. But if he does not listen, take one or two others along with you, that every charge may be established by the evidence of two or three witnesses. If he refuses to listen to them, tell it to the church. And if he refuses to listen even to the church, let him be to you as a Gentile and a tax collector.

20. James 1:22 Do not merely listen to the word, and so deceive yourselves. Do what it says.

21. Deuteronomy 21:18-21 Suppose a man has a stubborn and rebellious son who will not obey his father or mother, even though they discipline him. In such a case, the father and mother must take the son to the elders as they hold court at the town gate. The parents must say to the elders, This son of ours is stubborn and rebellious and refuses to obey. He is a glutton and a drunkard. Then all the men of his town must stone him to death. In this way, you will purge this evil from among you, and all Israel will hear about it and be afraid.

22. Isaiah 14:12-15 How art thou fallen from heaven, O Lucifer, son of the morning! how art thou cut down to the ground, which didst weaken the nations! For thou hast said in thine heart, I will ascend into heaven, I will exalt my throne above the stars of God: I will sit also upon the mount of the congregation, in the sides of the north: I will ascend above the heights of the clouds; I will be like the most High. Yet thou shalt be brought down to hell, to the sides of the pit.

End times in the Bible

23. 2 Timothy 3:1-5 But understand this, that in the last days there will come times of difficulty. For people will be lovers of self, lovers of money, proud, arrogant, abusive, disobedient to their parents, ungrateful, unholy, heartless, unappeasable, slanderous, without self-control, brutal, not loving good, treacherous, reckless, swollen with conceit, lovers of pleasure rather than lovers of God, having the appearance of godliness, but denying its power. Avoid such people.

24. Matthew 24:12 Because of the increase of wickedness, the love of most will grow cold.

25. 2 Thessalonians 2:3 Don’t be fooled by what they say. For that day will not come until there is a great rebellion against God and the man of lawlessness is revealed–the one who brings destruction.

2 Chronicles 7:14 if my people, who are called by my name, will humble themselves and pray and seek my face and turn from their wicked ways, then I will hear from heaven, and I will forgive their sin and will heal their land.

Previous: What Color Is God?