This is a hot topic in Christianity. Many people ask can Christians drink alcohol? Is drinking alcohol a sin? The first question should be rephrased to should we drink? It’s not condemned in Scripture, but there are many warnings against drunkenness. 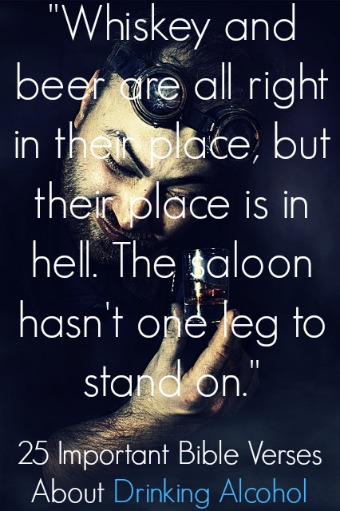 I’m not saying it’s a sin, but I believe Christians should stay away from it to be on the safe side. There are many believers who try to fit in with unbelievers and say don’t worry I’ll drink liquor with you. Why are believers trying to show that they can hang? Fit out instead. Let’s learn more on this topic.

These Scriptures show that drinking is not a sin. If used wisely in moderation alcohol can be a good thing.

1. “Ecclesiastes 9:7 Go ahead and enjoy your meals as you eat. Drink your wine with a joyful attitude, because God already has approved your actions.”

2. Isaiah 62:8-9 “The Lord has sworn by His right hand and by His strong arm, “I will never again give your grain as food for your enemies; Nor will foreigners drink your new wine for which you have labored.” But those who garner it will eat it and praise the Lord; And those who gather it will drink it in the courts of My sanctuary.”

3. Psalm 104:14-15 “You make grass grow for cattle and make vegetables for humans to use in order to get food from the ground. You make wine to cheer human hearts, olive oil to make faces shine, and bread to strengthen human hearts.”

4. Isaiah 55:1 “Come, everyone who is thirsty, come to the waters! Also, you that have no money, come, buy, and eat! Come! Buy wine and milk without money and without price.”

Benefits: Wine was used as medicine.

6. 1 Timothy 5:23 Drink no longer water only, but use a little wine for your stomach’s sake and your frequent illnesses.

What should be avoided and what is a sin is drunkenness.

We should avoid drunkenness at all costs. Throughout Scripture it is condemned and it leads to even more wickedness. There are so many warning Scriptures on alcohol, which should cause us to pause and think about should we fix a glass?

7. Ephesians 5:18 “And don’t get drunk with wine, which leads to reckless actions, but be filled by the Spirit.”

8. Proverbs 20:1 “Wine is a mocker, strong drink a brawler, And whoever is intoxicated by it is not wise.”

9. Isaiah 5:11 “Woe to those who rise early in the morning in pursuit of beer, who linger into the evening, inflamed by wine.”

10. Galatians 5:21 “Envyings, murders, drunkenness, revellings, and such like: of the which I tell you before, as I have also told you in time past, that they which do such things shall not inherit the kingdom of God.”

11. Proverbs 23:29-35 “Who has woe? Who has sorrow? Who has conflicts? Who has complaints? Who has wounds for no reason? Who has red eyes? Those who linger over wine, those who go looking for mixed wine. Don’t gaze at wine because it is red, when it gleams in the cup and goes down smoothly. In the end it bites like a snake and stings like a viper. Your eyes will see strange things, and you will say absurd things.  You’ll be like someone sleeping out at sea or lying down on the top of a ship’s mast. “They struck me, but I feel no pain! They beat me, but I didn’t know it! When will I wake up? I’ll look for another drink.”

Scripture teaches us to be sober minded. When you are vulnerable that is when Satan likes to attack the most.

We have to remember that Satan does seek to kill people. That is why it is important that we remain sober. One of the main causes of car accidents is drunk driving. I know people who died in a drunk driving accident and they died without knowing the Lord. This is serious. This is not something to play around with. If the devil can catch you with your guard down he will.

12. 1 Peter 5:8 “Be sober, be vigilant; because your adversary the devil, as a roaring lion, walketh about, seeking whom he may devour.”

13. 2 Corinthians 2:11 “in order that Satan might not outwit us. For we are not unaware of his schemes.”

When people think about drinking it is usually for the wrong reasons.

If someone used to be a drunkard and, then became a Christian it would not be wise for a person like this to consume alcohol. Why tempt yourself? Don’t slip back to your old ways. Don’t deceive yourself. Many of you know what you once were before Christ.

He doesn’t deliver you so you can put yourself in a position where you can fall. You might say it’s only one drink, but that one drink turns into two, three, etc. I’ve seen people fall so fast. This is just one of the reasons that I choose not to drink.

14. 1 Peter 1:13-14 “So think clearly and exercise self-control. Look forward to the gracious salvation that will come to you when Jesus Christ is revealed to the world. So you must live as God’s obedient children. Don’t slip back into your old ways of living to satisfy your own desires. You didn’t know any better then.”

15. 1 Corinthians 10:13 “No temptation has overtaken you except what is common to humanity. God is faithful, and He will not allow you to be tempted beyond what you are able, but with the temptation He will also provide a way of escape so that you are able to bear it.”

Too much people are addicted to alcohol.

17. 2 Peter 2:19-20 “promising them freedom while they themselves are slaves of corruption; for by what a man is overcome, by this he is enslaved. For if, after they have escaped the defilements of the world by the knowledge of the Lord and Savior Jesus Christ, they are again entangled in them and are overcome, the last state has become worse for them than the first.”

Many people ask can I drink a small amount daily. When do we draw the line when it comes to alcohol assumption? How much is too much?

The alcohol that was used in Scripture was not as strong as what we have today so we should actually drink less. All things should be done in moderation, but never make up your own definition for moderation. Alcohol tolerance levels vary, but one way to know is if Christ was standing in front of you would you have a clear conscience drinking a couple of glasses of alcohol a day?

Is it really showing self-control when consuming alcohol daily? Can it lead to pouring 2 more cups? These are areas where we have to discipline ourselves in. I am not saying you can’t drink, but I don’t believe it would be wise to drink every day, nor is it showing self-control.

19. Philippians 4:5 “Let your moderation be known unto all men. The Lord is at hand.”

One of the qualifications of a pastor is that they are men of self control. This is why many preachers don’t drink at all.

21. 1 Timothy 3:8 “In the same way, deacons are to be worthy of respect, sincere, not indulging in much wine, and not pursuing dishonest gain.”

22. 1 Timothy 3:2-3 “Now the overseer is to be above reproach, faithful to his wife, temperate, self-controlled, respectable, hospitable, able to teach, not given to drunkenness, not violent but gentle, not quarrelsome, not a lover of money.”

I believe mature believers should not drink alcohol.

Can you imagine trying to witness to others while drinking a beer? An unbeliever will look and say that just doesn’t seem right. You might not understand how it causes others to stumble, but it really does affect people.

23. Romans 14:21 “It is a noble thing not to eat meat, or drink wine, or do anything that makes your brother stumble.”

24. 1 Corinthians 8:9-10 “But take heed lest by any means this liberty of yours become a stumblingblock to them that are weak. For if any man see thee which hast knowledge sit at meat in the idol’s temple, shall not the conscience of him which is weak be emboldened to eat those things which are offered to idols.”

25. 2 Corinthians 6:3 “We put no stumbling block in anyone’s path, so that our ministry will not be discredited.”