Mormons are some of the kindest and friendliest people we could know. Their views on family and morality is not far different from that of Christians. And indeed, they call themselves Christians. 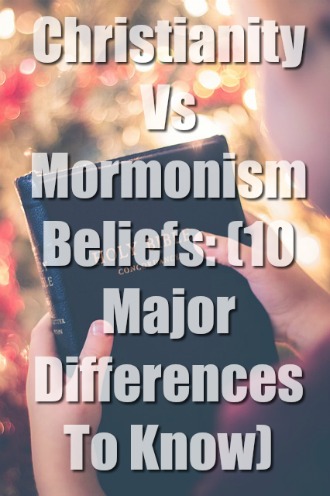 So are there differences between Mormons and Christians when it comes to how they view God, the Bible, salvation, etc.? Yes, there are significant differences. And in this article I will highlight several.

Christianity, as we know it today, goes back to the mid 30’s A.D. Acts 2 records the events of Pentecost and the coming of the Holy Spirit to indwell the disciples turned apostles. Many theologians see this as the birth of the church. Although one could also argue that the roots of Christianity date back to the dawn of human history, since the Bible (both Old and New Testaments) is a profoundly Christian book.

Nevertheless, by the end of the 1st century A.D., Christianity was well organized and spreading rapidly throughout the known world.

Mormonism only dates to the 19th century A.D. Joseph Smith Jr., was born in 1805. Smith would go on to found what is now known as the Church of Jesus Christ of Latter Day Saints, a.k.a., the Mormon Church.

Smith claims that when was 14 he experienced a vision in which God the Father instructed him that all churches were wrong. Three years later, an angel named Moroni visited Smith several times. This would lead to Smith recovering engraved golden plates (which are today non-extant), in the woods near his home, written in a language he called “Reformed Egyptian”.

Smith allegedly translated these golden plates into English and that is what is now known as the Book of Mormon. This wasn’t printed until 1830. Smith claims that in 1829, John the Baptist gave to him the Aaronic Priesthood, establishing Joseph Smith as the leader of the new movement.

The Doctrine of God

The doctrine of God is traditionally called theology proper. The Bible teaches, and Christians believe, in one God – who is the Creator of heaven and earth. That He is sovereign and self-existent and immutable (unchanging) and good. Christians believe that God is triune. That is, God is one and has eternally exists in three persons: the Father, the Son and the Holy Spirit.

Mormons views about God have varied widely over their short history. In the early years, Mormon leader Brigham Young taught that Adam was the father of the spirit of Jesus, and that Adam is God. Mormon’s today do not believe this and many have disputed whether Brigham Young was properly understood.

However, Mormons indisputably teach a doctrine called eternal progression. They teach that God was once a man and was capable of physical death, but He progressed to become God the Father. Mormons teach that we also can become gods.

Mormons believe that gods, angles, people an devils are all fundamentally of the same substance, but that are merely at different places in the eternal progression.

The Deity of Christ

Christians believe that Jesus Christ is the Son of God, the second member of the trinity. When Jesus was born, the “Word became flesh and dwelt among us.” (John 1:14). Christians hold that Christ has existed eternally and is truly God. Colossians 2:9 says: For in Him (Christ) the whole fullness of deity dwells bodily.

Mormons hold that Jesus is pre-existent, but His pre-mortal form was not as God. Rather, Jesus is our elder brother from the great star, Kolob. Mormons explicitly (if complicatedly) deny the full deity of Jesus Christ.

Mormons view the doctrine of the trinity as a false and pagan notion. Mormons view the Godhead as similar to the “First Presidency” of the church. That is, they see the Father as God, and Jesus and the Holy Spirit as the president’s two counselors.

Joseph Smith decried the biblical understanding of God in a sermon on June 16, 1844 (days before his death). He said, “Many men say there is one God: the Father, the Son, and the Holy Ghost are only one God. I say that is a strange God anyhow; three in one, and one in three!

“It is a curious organization … All are to be crammed into one God, according to sectarianism. It would make the biggest God in all the world. He would be a wonderfully big God—He would be a giant or a monster.” (Cited from the Teachings, p. 372)

Evangelical Christians believe that salvation is the free gift of God (Ephesians 2:8-9); that a person is justified by faith alone, based on Christ’s substitutionary atonement on the cross (Romans 5:1-6). Further, the Bible teaches that all people are sinful and unable to save themselves (Romans 1-3), and therefore it is only by God’s intervening grace that any can be brought back into a right relationship with God.

Mormons hold to a very complex and distinct system of views on salvation. On one level, Mormons believe in the universal salvation of all people through the work of Jesus Christ. This is often referred to as universal or general salvation in Mormon literature.

On the individual level, Mormons believe that salvation is acquired through “gospel obedience”. That is, through faith, repentance, baptism, receiving the Holy Spirit, and then successfully completing “mortal probation” by living a righteous life. Together, this enables them to progress in their eternal progression.

Christians hold that the Holy Spirit is the third person of the trinity, and as such He has a personality and has existed eternally. He is, and always has been God.

Christians hold that the atonement was God’s gracious work in Christ, who stood in the place for sinful man and absorbed the just penalty for sin (2 Corinthians 5:21 and 1 John 2:2). Christ’s work on the cross satisfied God’s justice and allowed man to be reconciled to God.

Christians believe that all true Christians make up the true church. Theologians often refer to this reality as the universal or invisible church. It is what Paul referred to in 1 Corinthians 1:2: together with all those who in every place call upon the name of our Lord Jesus Christ.

Further, Christians believe that the local church is a group of true Christians who have voluntarily covenanted together to worship God as a church (e.g., Romans 16:5).

Since the very beginning, the Mormons have rejected all other churches outside of the Mormon church. At various times Mormon leaders and teachers have referred to the Christian church as the “church of the devil” or the “church of abomination” (see, for example, 1 Nephi 14:9-10).

Today, seldom is that sort of directness apparent in Mormon publications. However, historically and canonically (according to writings Mormons hold sacred), this is how the Christian church is viewed.

Christians believe that there is life after physical death for everyone. When those who are saved by faith in Christ die, they depart to be with Christ (Phil 1:23). They will all eventually dwell with God in the New Heaven and New Earth. Those who perish in their sin will suffer eternal punishment, away from the presence of God (2 Thessalonians 1:9).

Mormons hold to a view of both eternal damnation and eternal life, but their view is distinct from the Christian/biblical view. A person who will suffer eternal damnation is essentially forfeiting, by his misdeeds and unfaithfulness, the benefits of eternal life (see comments on eternal progression below). They are not allowed to progress on to eventually become gods. Instead, they “attain a kingdom of glory”, but not one where God and Christ are. (See “Mormon Doctrine” by Bruce McConkie, page 235).

Those who do attain to eternal life are eligible for eternal progression, the process over time of becoming gods. Just as God the Father progressed to become God, so they themselves will eventually attain deity.

Christians believe that man is made in the image of God. Each person is part of God’s design, and his or life (and existence) begins at conception.

Christians hold that the Bible is the sole infallible authority for life and faith.

Mormons, while holding that the Bible is a part of the Canon of Scripture, add to it several Mormon works: The Book of Mormon, The Doctrines of the Covenant, and The Pearl of Great Price. All of these should be interpreted together, and from them the true teaching of God can be made clear. Mormons also hold the infallibility of the sitting President of the Church, at least when acting in his official teaching and prophetic capacity.

As noted above, a true Christian is one who trusts in the finished work of Christ alone (see Ephesians 2:1-10). It is what Christ has done, not one’s own righteousness, that makes a person acceptable to God (Phil 3:9). A person is a Christian only by faith in Jesus Christ. It is through faith, based on Christ’s work on the cross, that a person is justified before God (Romans 5:1).

Mormons explicitly deny this truth (they do, at least, if they are consistent with what the Mormon church teaches). Their view of salvation is a mix of works and grace, with the heaviest emphasis placed on works. Thus, while generally being very kind and moral people, we cannot call Mormons Christians in the biblical sense of Christianity.