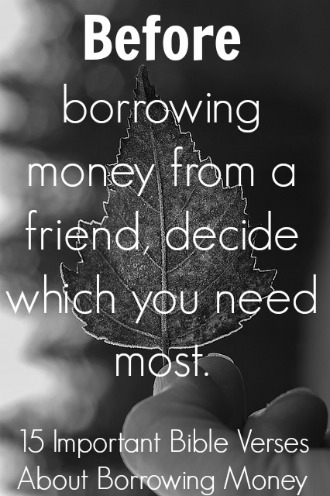 Do you really need to borrow money? Can you cut back without having to borrow money? Is it truly a need or do you just want a little spending money? Did you go to God first and ask for help?

People often ask to borrow money, but they really do not need it. I’ve had people ask to borrow money from me and then I found out that they needed the money to go do stupid things. It hurts the relationship. Of course I forgave, but it really did hurt me to be used. Take a look at James 4:2-3. James 4:2-3 reminds me of this topic. Let me explain why.

“You desire, but you don’t have so you kill.” You kill your relationship because money hurts the relationship. Look at the next part you quarrel and fight. Money can easily lead to fighting and arguing. I’ve even seen fights happen because someone refused to lend someone money. The last part reminds us to ask God. Have you asked Him? Are you asking with the wrong motives?

1. James 4:2-3 You desire but do not have, so you kill. You covet but you cannot get what you want, so you quarrel and fight. You do not have because you do not ask God. When you ask, you do not receive, because you ask with wrong motives, that you may spend what you get on your pleasures.

Some people take out loans and never pay back. Scripture lets us know that if someone does borrow they better pay back. Don’t say to yourself “they wouldn’t mind they never bring it up.” No, pay back! All debts should be paid.

When someone borrows but doesn’t pay back that really says something about them. Debt can show a trustworthy person from a scoundrel. Banks feel safer loaning money to people that have good credit. It is hard for someone with bad credit to get a good loan.

2. Psalm 37:21 The wicked borrow and do not repay, but the righteous give generously.

4. Luke 16:11 If then you have not been faithful in the unrighteous wealth,who will entrust to you the true riches?

Money can break a good friendship.

Even if you are the lender and you are OK with the person not paying you back the borrower can be affected. It can be a close friend who you talk to regularly, but as soon as they owe you, you will not hear from them for a while. It starts becoming harder to get in contact with them. They don’t pick up your calls. The reason that they start avoiding you is because they know they owe you money. The relationship becomes awkward. When a borrower is in front of the lender they get convicted even when the lender doesn’t bring the subject up.

5. Proverbs 18:19 A broken friendship is harder to deal with than a city that has high walls around it. And arguing is like the locked gates of a mighty city.

Not having to borrow money is a blessing from the Lord. Most of the time when we listen to the Lord and handle our money right we will never be in debt.

7. Proverbs 21:20  Precious treasure and oil are in a wise man’s dwelling, but a foolish man devours it.

God doesn’t want us to be a slave to anyone. We should seek God instead of lenders. The borrower is a slave.

8. Proverbs 22:7 The rich rule over the poor, and the borrower is slave to the lender.

9. Matthew 6:33 But seek first his kingdom and his righteousness, and all these things will be given to you as well.

I’ve learned not to lend people money because that can cause you to stumble, the borrower to stumble, and it can break the relationship. It is better to just give the money to them if you are in a position to give of course. If money is tight just be honest with them and tell them. If you can give, then do it out of love expecting nothing in return.

10. Matthew 5:42 Give to the one who asks you, and do not turn away from the one who wants to borrow from you.

11. Luke 6:34-35 If you lend to those from whom you expect to receive, what credit is that to you? Even sinners lend to sinners in order to receive back the same amount. But love your enemies, and do good, and lend, expecting nothing in return; and your reward will be great, and you will be sons of the Most High; for He Himself is kind to ungrateful and evil men.

12. Deuteronomy 15:7-8 If anyone is poor among your fellow Israelites in any of the towns of the land the Lord your God is giving you, do not be hardhearted or tightfisted toward them. Rather, be openhanded and freely lend them whatever they need.

Is it wrong to charge interest on a loan?

No, there is nothing wrong with charging interest in business. But we should not charge interest when lending to family, friends, the poor, etc.

13. Proverbs 28:8 He who increases his wealth by interest and usury Gathers it for him who is gracious to the poor.

14. Matthew 25:27 Well then, you should have put my money on deposit with the bankers, so that when I returned I would have received it back with interest.

15. Exodus 22:25 If you lend money to My people, to the poor among you, you are not to act as a creditor to him; you shall not charge him interest.

Next: Biblical Reasons For Divorce